Haha, the cynical side of me loves this!

Advertising’s love affair with romance goes way back, perhaps to the birth of advertising itself.  People never seem to tire of images that portray intimacy in connection with the act of purchasing.  A recent ad by Paypal seems innocuous enough: a girl wearing a heart-shaped pendant kisses a young man in a suit.  Our eyes soon wander to the adjacent slogan: “Necklace selected.  Privacy protected.”  Another slogan beneath the Paypal logo drives the message home, subtly merging people with objects: “Go for the things you love with confidence.”

What do we have here?  On the surface: technology in the hands of consumers for the benefit of their personal lives.  Just beneath: a slick appeal to fantasy and power.  At the core: capitalism packaged as romance in the service of reproduction, or, survival of the fittest.  On a subliminal level, we might say: “Mate obtained.  Risk eliminated.”

Ron White…not one of my all time favorite comedians, but this joke seriously stuck with me, for years actually.  I’m going to second this by a few humorous images depicting various “Darwin Award” type situations. 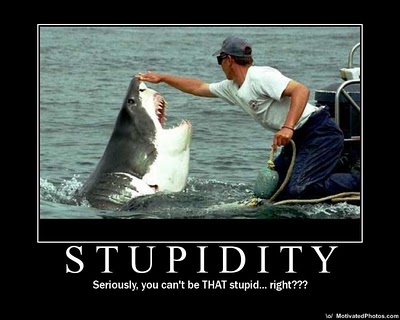 Alright, hopefully you’ll have found the humor in the above images, so I am not crucified for the following statement:  If a kid is playing in the street (we’re talking 4 years or older), sees a car barreling down at them, and proceeds to stand there, even after the car has STOPPED for over a minute, then go back to playing as if there were no car there…they may be testing the process of natural selection.

I say this from an extremely jaded point of view of a person who has this happen on a daily basis, and from the view of someone who has never had kids, so keep that in mind.  Allow me to dig my moral grave a bit deeper…

Driving home from work one day, a child ran into the street…pardon me, three children ran into the street, and stood there, staring at my car.  I pulled to a stop, in the middle of the road, and proceeded to wait as the parents of said children continued to stand on their doorsteps for the length of “Amaryllis” by Shinedown (roughly 3 minutes) before one walked out of another house, into the street, and proceeded to herd the children back to the sidewalk.  As I pulled into gear and crept down the street at a sedate 5 mph, I looked into my rear view mirror, and to my dismay, saw the same three kids run back into the street gleefully, as the one responsible adult then walked back into the house and closed the door.  At this point I made an offhand comment which has consisted to stick with me.  “I swear to god, if Ron White can make a joke out of deer hunting with a car, why can’t it be considered hunting when dumb ass kids play in the street, the same as deer, and get hit by a car”.

I now open the floor to criticism, hate mail, and comments.  And I dig my grave a little deeper.  Here we go!

We hunt game, partly as sport (not for me, but for something like 7% of the American population), and partly for population control.  Game populations would overpopulate, and ultimately chew through their resources, literally (see Mountain Lions in Western South Dakota vs. the Elk population, literally chewing through the population).  So, what do we, as God fearing survivalists do?  We buy little pieces of paper, pick up our guns, and have at it, all in the name of over population.

So…we justify killing animals in the name of population control.  What is there to control our overpopulation?  Our good old friend, Charles Darwin.  So, “Darwin” has been purchasing hunting licenses regularly, and sometimes it seems to unfair that he is cheated out of his tag.  I have to wonder, if we intervened a little less, would Darwin help balance out our overpopulation of the planet?  No, I don’t think kids should be hit by cars for playing in the street, but at the same time I think it’s wrong that they expect the world to bend around their needs from the age of 3 until 30 (or so it seems sometimes) and when they are grown up (note, I said grown up, I’m not suggesting genocide stupid kids, the world would go barren in a heartbeat), sometimes it is fitting that they meet Darwin face to face.

I tip my hat to you, Mr. Darwin, and hope at least for me that we don’t meet for many years, this is one tag you’re going to have to wait for.

My husband wants a GoPro, a similar camera to what our riders in this video are wearing, yay!

I promise I try to be good, every single day, but it feels like I’m a smoker who’s going to quit, and I quit every day, only to light back up after breakfast the next morning.

I say “I’m back on my diet” as I reach for a soft shell taco at a local restaurant.  “I know what I’m doing” as I reheat my leftover Chinese food for dinner.  “It’s ok,” I say, “It has chicken and a lot of veggies in it, and I’m not eating all the Spicy Brown Sauce.”

Even to my own ears the excuses seem to fall flat, obvious in their attempt at justification.

“I’ll restock on healthy food when I get paid, my shelves are bare from me being gone for a week.” seems to be translating into “I’ll start tomorrow.” and I have to wonder, how many “tomorrow’s” will there be before the scale starts to go up again?

I fought tooth and nail to get down to 162, and although as of yesterday I was below that, I didn’t weigh myself this morning, and deep down I think I know why:

My head is firmly buried in the sand

Have you ever known you were gaining weight, or cheating on a diet, so you avoid the scale?  It’s like keeping your eyes closed at a scary movie.  Everything is happening anyway, but you don’t want to see it.

Today I will try again, and yes, I am out of my GNC shakes, and my Wonderslim is depressingly low, but that is no excuse not to TRY.

He is such a sweetheart that one.  And yes, he is a Husky mix, here he is:

Yes really, that’s him…kind of funny that I’m pretty sure he doesn’t think he is fat, either, and it makes total sense his head is buried in the snow…

Today I will bring my cinnamon vanilla cereal to work and snack on it if I get hungry.  It has 15g of protein and only 4g carbs in a baggie.  I will also eat my soup that is at work, another 15g protein and about 6g of net carbs.  Finally, I will drink my 80 ounces of water today, I swear, I will…try.

With that being said, I’ve held myself accountable to the world, and left it all out there, so to speak, and now I go to start my day anew.